My RV Batteries Won't Retain Charge For More Than 12 Hours

Question: I have a 2006 Keystone Cougar 28'. The last two times I have had it out the batteries would not hold a charge for more than 12 hours. Usually I could stay out 3 to 4 days before running the generator. This past weekend I went back to town and bought two new batteries. They were dead before morning. Any idea what would be causing the draw?

Robbie: There is a simple test to see if you have a draw on the system. All you need is a 12V test light and needle nose pliers and a second person to hold the test light and yell when the light goes out.

NOTE: If you have push button battery disconnects, this test won't work. Let me know if you do and I'll explain the second test you can do.

Remove the positive connection from the battery. Put one end of the test light on the battery positive and the other on the wire you disconnected. If the light comes on you have a draw on the batteries...

If the light is ON do the following:

Take the needle nose plyers to your converter or main 12V fuse panel and remove one fuse at a time until the test light goes out. When the light goes out you've found the draw on the system, or at least have an idea if you know what the fuse you pulled goes to.

If the light remains on after pulling all the fuses, call a tech.

Enjoy this page? Please help us pay it forward to others who would find it valuable by Liking, Sharing, Tweeting, Stumbling, and/or Voting below.

Have a question about this topic?

Have a question about your RV? Chat with an expert one-on-one now.*

*Chat provided by JustAnswer.com, a third party not affiliated with MSRVR

We pride ourselves on being able to offer free, quality information to RVers about repair and service. If advice on this site has saved you money or time, we would certainly appreciate it if you would consider making a small donation.

All proceeds go towards supporting our continued effort to provide you with quality, money-saving RV repair info.

Have an RV Question?

Kind Words From Our Visitors 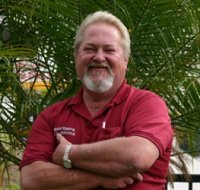 Like the name implies, this site is all about helping you save money while keeping your RV in tip-top shape--and that is all about you having the knowledge to do so.

I've been a technician in the RV industry for 30 years, operating out of San Diego, California. And let me tell you, I love my job.

But I also love empowering RVers with the knowledge they need to make the right decision on repairs, or to make the fix themselves--and that, my friend, is the reason for this website. I hope you enjoy.

Or, learn more about me, my RV service practice, & this website here.